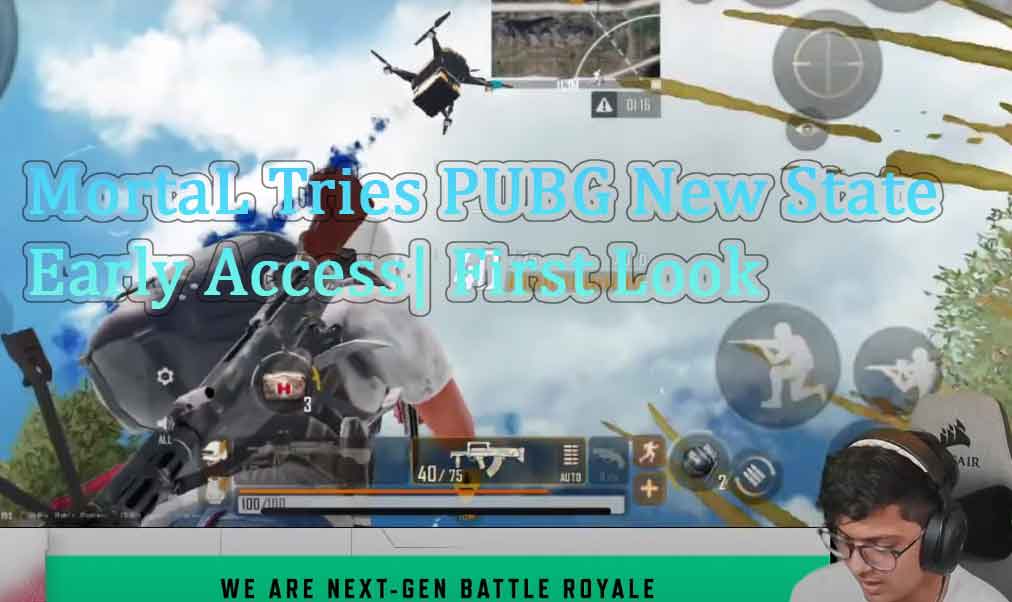 Today on 10th October, Finally the PUBG New State brought some light. A few days ago the game released their second alfa test for some of the few. And today they have finally come up with a more detailed version of the game. The famous PUBG mobile gamer MortaL tried the PUBG New State Early Access and he has a lot to share with the fans.

Today, we are going to know all this information about PUBG New state on this post you are reading. Along with that, we are also going to tell you how can you get the PUBG new state early access and try it yourself.

Then again today, PUBG New State came with a New Technical Test for the game and it is also for the registered players only. But, this time, the game itself came with many updates and final answers for the rising questions from the fan.

But before that, we have more to know from the Mortal himself, who tried and live-streamed the very first PUBG New State Early Access on his YouTube Channel.

MortaL started with PUBG New State today morning with a title that says PUBG NEW STATE IS HERE | (FIRST LOOK) EARLY ACCESS |#pubgnewstate #mortalarmy. He starts by exploring the game lobby and settings. There are many changes in the lobby and gameplay settings themselves.

He starts from the settings and finds out a new setting that is rolling. Double-tapping crouch enables rolling in PUBG New State which is a brand new feature.

Moving on, MortaL also sets up his settings sensitivity and control keys on the screen. The below image will show the full control key setup done by MortaL.

After changing the keymap, he also notices the frame rate settings which can be set up to Ultra on the PUBG New State. After getting the Ultra mode in Frame Rate Mortal jumps in shock seeing the smoothness of the game.

He also tells his fans that this time it is going to be the real competition in PUBG New State.

He also explores the maps. There are 4 maps in the game. The first one is the much known Troi, and then the new Erangel 2051, Station for the TDM, and the last one is the Training Ground. You can check more about the Maps on The PUBG New State Map Details.

MortaL of course tried the Erangel 2051 first in the solo mode. The map was full of new surprises, and new gameplay features. As we already talked about the electric bus in our other post, apart from the new drone credit is also very cool.

You can use the money to order gadgets, shields, guns, etc. And it will literally get delivered to you via drone. You can check below.

As MortaL explores the whole Erangel, he finds a few bots, the motor glider, racing cars, new electric buses. There are also new guns to try.

Along with the way, he also gets a good player which he manages to kill. In the last Zone, MortaL struggles to get in the Zone. There were some players still alive on the map, he had to be careful.

Watching the last Zone in the Military Base, he finds his way in a safe spot but as soon as he gets out of his car, a random player finds him and kills him before he knows.

MortaL really finds the gameplay cool. He enjoys the play. After getting killed and placed in the 6th position for the match, he also notices a viable detail for the last match. On the end screen, it shows clear details of the Zone pattern and your way to the last zone, where you got any kills, where you went, etc.

Overall, you will get a more clear view of your play after the match ends. With this graph and details, you will be able to get more ideas and a clear vision of your future plays. It will also make the player smarter about the map and their movement.

After finishing up the first match, MortaL starts a new Duo Match on the Erangel again.

When PUBG New State is going to be released?

According to the recent announcement by Krafton, The PUBG New State Game is going to be released on 11th November 2021.

Final Words: There are many features and updates to come to the PUBG New State Game. Mortal tried and gave us the first look with his first opinion on the game. If you also want to try this game before everyone. You can visit How to Download PUBG New State.

However, the app may not work for everyone for now. You can either pre-register it from the PUBG New State Officials too.

Thanks for visiting our page. Follow for more news and updates.